What I think about

If you don’t like sports anime, it doesn’t necessarily mean you won’t like Kuroko no Basket. I’ve never even watched any and truthfully, wasn’t really interested. I don’t know what exactly sparked my interest in this anime, the fact that my bff plays basketball, the great studio, or the bishies. Either way, I’m very glad I ended up watching Kuroko no Basket, because I loved it to bits. It turned out as a pretty good show, and the thing I liked the most – it’s very easy and interesting to watch.

Kuroko no Basket was released in spring season 2012 by Production I.G. The studio that also released Ghost in the shell movies, FLCL, Guilty Crown, Neon Genesis Evangelion, Higashi no Eden, Usagi Drop, my beloved Kimi ni Todoke and Hiyokoi, Ghost Hound, (which I just CAN NOT watch for the love of me, even though I want to so badly) and a couple of other sports anime like Eyeshield21 and Prince of Tennis. This made me feel a little bit secure from facing a terrible disappointment .

First of all, art. At first, I felt a little bit skeptical, because I didn’t know how they would manage the complexion of the players and their animation. But I was pleasantly surprised with how neat and realistic the characters looked, even during the games. I can’t help but to fangirl about the players, because they’re all incredibly hot, all those muscles drawn almost perfectly… 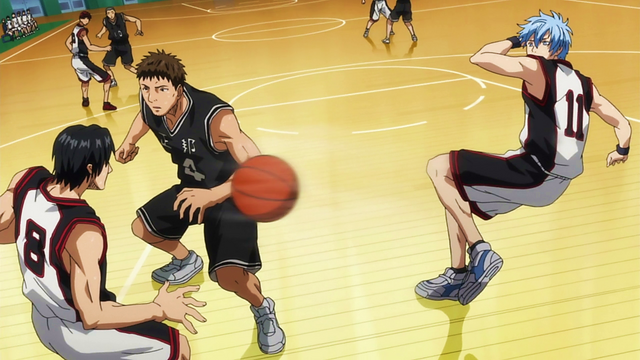 The animation was also nice and clean. Not amazing like in K, but still great. The quality didn’t decrease or go up and down throughout the show and even got better towards several last episodes. Character design was fairly interesting, though it’s funny how all the players from the Generation of Miracles (+Kagami) all have crazy colored hair(besides Kise, more or less). It’s like every character has their own color.

Well, I don’t really consider this a flaw, but it still stands out in a weird way. All other characters look really nice, though I have one complaint. 70% of them don’t even look like High School students!!! Just look at the dudes from Senshinkan, do they look like 16 to 18yearolds???? To me, they definitely don’t. Again, it’s not necessarily a bad thing, but it stands out in a very weird way. It’s not unbearable, but I couldn’t help but note that time after time.

I loved the BGM. No, I seriously loved it. It was so perfect for a sports show! Active, strong, motivational, sometimes it made chills run down my spine, and that’s what I value most in background music. When it can make the scene you’re watching so real, that you literally feel the tension and pressure that the characters feel. I’m not saying that this is the most amazing BGM I have ever heard, but it’s above the average line, if you ask me. Some of the tracks were better than others, but all in all, every single one fit the scenes perfectly, be it a funny scene, a scene with a conflict between characters or last seconds of a match, it was all amazingly balanced. The OP-ED sequences were great too. I still droll over the second ending. The guys look so amazing in that ending, I get a nosebleed over and over when I watch it

The seiyuu cast was also very nice. I didn’t recognize anyone besides Hoshi Souichirou, who voiced Kasamatsu Yukio and Ono Daisuke, who voices Midorima Shintaro. But I was pleasantly surprised, because all seiyuu had done great jobs. I especially liked Ono Yuuki, who dubbed Kagami Taiga, (also dubbed Kaname from Kimi to Boku and Arai from Kimi ni Todoke), my beloved Kise-kun’s seiyuu, Kimura Ryouhei, who also dubbed Akira from Higashi no Eden, Yuuki from Kimi to Boku and Nakai Kazuya, who sounded very familiar and when I looked it up in MAL I felt like an idiot. He also voiced Bon, from Ao no Exorcist and Doumeki from xxxHOLiC. All in all, every seiyuu sounded pretty much spot on.

Lastly, the plot, character development and, to say roughly, basketball moves. The plot is pretty plain and predictable. Most of the time I consider it a major disadvantage for the show, but in this case, the details have the last say, not the plot. And those details were managed nicely. The dialogues, characters, scenes were all set pretty well, which made Kuroko no Basket so watchable. Especially, I loved how detailed the characters were. They had habits and unique characteristics; I wouldn’t call any of them stereotypic. For example, a seemingly typical happy-go-lucky Kise tried to shake Kagami’s confidence during their friendly match, but Kagami, the seemingly stupid and simple-minded muscle ball, didn’t get down as I expected, pretty much the opposite – laughed and thanked Kise for the motivation. And that’s only one example, but I think it’s pretty much enough to get to the point. The character development was also great, for example let’s take Kise and Kagami again. The first changed his point of view about the main reasons of playing basketball and realized that playing by yourself for the sole purpose of winning is incorrect. The second became more mature, calmed down and instead of just running around with a ball, started to polish his skills and turning his weaknesses into strength. (thanks to you know who’s help :3)

And lastly, about the gameplay. I’m a newbie in basketball so to avoid saying too much stupid stuff, I won’t say a lot. I thought that there were quite a lot of nonsensical moves in this show, but actually, most of them aren’t nonsensical. I asked my bff to show me some of the best dunks, jumps, passes etc. and I was surprised that a lot of the crazy moves I’ve seen in KnB have actually been done in real life. For example, Kuroko’s cyclone pass,

or Midorima’s range being the whole court (Vince Carter had actually got the ball in from the other end of the court, sitting, ROFL). The non-real moves: when Kuroko just punched the ball to accelerate it’s speed and when Kise threw the ball from the back(episode 24) and got it in. Those two are the only ones I can recall, so do the math yourself haha 😀

All in all, this is a very nice show. Though if you’re a guy, you should be prepared to see slightest hints of BL. I know, it’s barely noticeable, but if you’re used to such stuff you’ll notice it right away. There are moments when I went “an ordinary guy wouldn’t do this oO” but still, this doesn’t get in the way of the actual basketball. I think that Kuroko no Basket was primarily targeted at female audience, but if a guy is a little forgiving towards BL, he will enjoy it as well. Personally, I fell in love with this anime. And I’m a girl.

2 thoughts on “Kuroko no Basket”